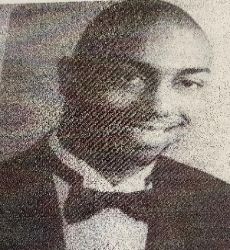 As a young child, Ron loved going to church.  He developed a deep love for God, his house and his people.  Ron accepted the Lord Jesus as a young boy, and was baptized by his father at the Glorious Hope Baptist Church in Elizabeth, NJ.  The sound of praise and the sound of the drums excited him.  It was here at Glorious Hope, Ron's gift of playing the drums manifested.  As his journey in life began as a musician he discovered another gift - humility.  This gift changed his life forever.

At the age of 5, Ron felt challenged when he heard a 10 year old drummer play.  This kid was great!  As his mother, Lisa recognized the "POUT" and dissatisfied look on Ron's face.  She gently summoned him and lovingly told him how well he played on that day.  She also informed him that he wasn't the only drummer that God would use.  She encouraged Ron to always compliment and encourage others.  Ron received what his mother said and throughout his life he was always an encouragement to others, even from his hospital bed.

At the age of 9, Ron became a member of Living Word Christian Fellowship Church, Neptune, NJ where he served as a musician for 9 years.  He also attended Greater Emanuel Temple in Neptune, NJ.  At 14 years old, he played his first live recording for Angel Garrett at Christ Church, Montclair, NJ.  He answered the call and served as a Drummer and Worship Leader at United Fellowship Baptist Church in Asbury Park, NJ.

God opened many doors for Ron.  He was blessed to befriend and minister with beloved artists.  He recently completed work on Bryan Popin's latest project.  Ron's sound and encouragement to others will truly be missed.

Ron is predeceased by his father Ronald Carter, Sr., and his paternal grandmother Jeannie Lee Carter.

He is survived by his mother Lisa, sister Randall Carter, maternal grandparents Janet and Tracey Singleton, Jr. as well as a host of aunts, uncles, cousins, God-brothers, God-sisters and beloved friends.