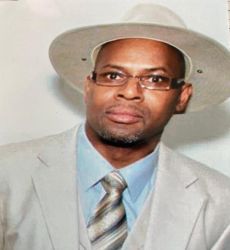 Ronald Gibson, beloved brother, father and grandfather transitioned to heaven on September 4, 2021 after a long battle with his failing health.  Ronald was born in Long Branch on March 26, 1963 to the late James and Nancy Gibson.  For most of his life, Ronald remained a resident of Long Branch.

Ronald was a U.S. Army veteran.  He was a self-taught auto mechanic and he could do many types of home repairs.  Ronald provided auto repair services to many in the community.  When considering what he would charge someone for his services Ronald thought about their economic situation.  Ronald had a special compassion for the elderly and for mothers.

Ronald became an uncle at a young age and he developed  a strong bond with the family's first generation of nieces and nephews as he looked out for them as they grew up.  As the next generation of nieces and nephews came into the family Ronald would dress up as Santa Claus at Christmas time.  Ronald raised his sons Ron and Ronnie as a single parent.  Ronald was very happy that he was able to attend their high school graduation this past June.  Ronald liked to cook.  He enjoyed preparing holiday meals and lighting up the grill on occasion.  During football season Ronald would be seen wearing his Denver Broncos jersey.  Like many locals, he enjoyed watching horseracing.

Ronald was preceded in death by his beloved mother Nancy Gibson, his father James Gibson and brother Randy Gibson.  Ronald is survived by twelve siblings: his five brothers James (Sheila), Douglas (Gwen), Larry, Robert, Donald (Diane) and his seven sisters: Jessie, Mary, Theresa, Peggy (Mark), Angela, Patricia and Monica (Melvin).  He is survived by his beloved three sons: Ronald Jr., Ron and Ronnie and grandson Izayiah; they will forever cherish his memory.  He is also survived by his Aunt Louise, Uncle Walter and special family friend Roserita Edwards.  In addition to his beloved niece Ayana, a nurse who aided Ronald very much during his last months, Ronald is also mourned by and will forever be cherished by his many beloved nieces and nephews made up of three generations as well as cousins and friends.