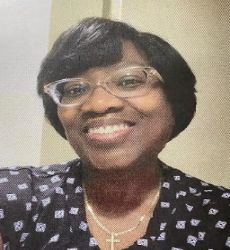 Sheryl Sharmane Scott, daughter of Andrew and Elaine Solomon was born on October 8, 1967 in Kingston Jamaica.

She arrived in the United States at the early age of 2 and lived in New York before moving to Hazlet, New Jersey where she attended the Hazlet school system. Before coming to the United States, she was christened at Bethel Church in Kingston Jamaica. As a young child, Sheryl attended Middletown Baptist Church before going to St. Paul in Atlantic Highlands as a teenager. In her adulthood, Sheryl became a member of Community Bible Fellowship where she was baptized and has served on the usher board for over 20 years. She has been a loyal church member and believer in Christ through her unexpected passing.

As a young woman, Sheryl ran track and field at Raritan High School where she participated in disc, javelin, and shotput. She used to enjoy going to the movies with her family and traveling with her parents. After high school, Sheryl worked in the banking industry for over 30 years. She held the title of Vice President at Valley Bank before moving to South Carolina to continue her career at PNC Bank earlier this year. Outside of her successful career in banking, she loved to try new restaurants, roller skate, go to football games, travel, and go on any adventure that involved family.

Sheryl was a devoted mom, wife, daughter, sister, aunt, and friend. She was highly involved in the activities that her children and nephews/nieces participated in. You could always count on Sheryl standing on the sidelines cheering you on. She was typically the loudest one in the crowd and yelling a special tagline only you two understood. She had pleasure in planning parties to ensure people were celebrated for their accomplishments, but when it came to her, she was the humblest person you could ever meet. Sheryl had an emotional attachment to the people in her life and truly embodied what it meant to have a big heart.