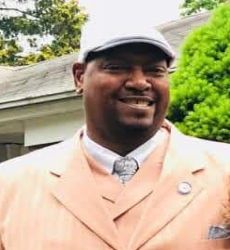 Sidney Louis Armour, 52 of Long Branch, NJ joined his heavenly family on Thursday, November 18, 2021.  God in his precious mercy, dispatched one of his angels to receive the soul of Sidney Louis Armour for his final resting place.

Sidney was born January 14, 1969 in Long Branch, NJ to Barbara and Louis Armour.  He lived a good portion of his life in Long Branch with his beloved wife, Alisa Dawn Armour and their three beautiful daughters, Lindsey Talyor Armour, Logan Leslie Armour and Lacie Dalanna Armour.

He was employed with New Jersey Natural Gas Company for 25 plus years, from which he held many positions.  In May of this year, Sidney retired as a First Responder.

Sidney loved his family, football team-mates and very close friends.  He was a devoted Dallas Cowboys fan, as well as being a coffee, food and cigar connoisseur.  He was a member of the Long Branch Elks Lodge #742 and Lamp-Lighters Association with New Jersey Natural Gas.  Sidney loved to sit by the ocean, fishing and loved to find a good deal.  He was a proprietor of various businesses throughout his life.

Sidney is predeceased by his father, Louis E. Armour.

He leaves to mourn his passing his wife of 27 years, Alisa Dawn Armour, his daughters, Lindsey, Logan and Lacie, his mother, Barbara Ann Armour of Long Branch; sister Michelle Madison of Long Branch; two nephews, Sean and Justin Madison, and a host of other family and friends.

He will be forever missed and never forgotten.