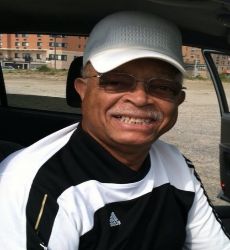 SSG Walter Dennis "Denny" Morris, 75, son of the late Margaret L. "Kitty" Saunders, older brother to John W. Morris and Reginal Saunders.  Dennis was born on May 19, 1945 in Long Branch, NJ and was raised by his Aunt Catherine "Lorraine" Overby.  He graduated from Red Bank High School in 1964 and in 1966 was drafted in the United States Army serving in Vietnam.  During his 20 years in the United States Army her served as a infantryman, longshoreman and tank system mechanic.  He was stationed in Germany and Texas and also spent a few years in the United States Coast Guard.  After the Army he worked in construction for a short time and later a security guard for years in various locations including Fort Monmouth before he retired.  He was a member of the VFW Post #2639 and the American Legion Post #266 in Neptune, NJ where he acted as the finance officer for many years.  He was a proud to be a Veteran.

Dennis considered himself a family man with good character.  He was a kind man and loved life.  He was a kind man and loved life.  He enjoyed the company of family and friends, having a good laugh and dancing to "oldies but goodies" music.  His all time favorite hobby was going fishing early in the morning until late afternoon.  Dennis also enjoyed cooking, watching old westerns and action movies and seeing his grandchildren grow.  He was a proud San Francisco 49ers fan and everyone knew it.  On really nice days he loved taking drives through Long Branch or Asbury watching the towns change and then grabbing a hot dog to eat while sitting by the ocean.  His favorite place for a hot dog was at Windmill in Long Branch or the hot dog truck in Red Bank by the train tracks.  Anytime you saw him Dennis always had a big smile on his face.

Dennis transitioned to his heavenly home on the 23rd of February, 2021 at Monmouth Medical Center in Long Branch, NJ.  His legacy is survived by his wife Betty J. Morris, Eatontown, his aunt Catherine "Lorraine" Overby, Tinton Falls, his children Denny S. Morris, Germany, Kai C. Morris, Belmar, Annie Eagle Cosentino, Tinton Falls, Leilani M. Sacasas, Asbury Park and Rhonda Morris, Texas and his grandchildren Marcel Morris, Alisha Morris, Alaiza A. Cosentino and Hunter A. Cosentino.  His beautiful life will be cherished in the lives of his family and a host of nieces, nephews, cousins and friends.