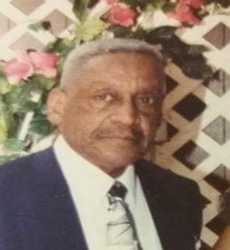 William grew up in Red Bank, NJ and graduated from Red Bank High School in 1947.  He's been a member of Pilgrim Baptist Church, Red Bank, since he was a young boy.

William joined the Army in 1947, serving in Germany, Korea and Japan.  William worked for the Department of Corrections, retiring after 30 years of service.

William is survived by 5 children Adrian Hammond of Keansburg, NJ, Donna Herring of Norfolk, VA, Jennifer Washington of Elizabethtown, KY, Michael Derickson of No. Highland, CA and Roger Derickson of Jackson, NJ; 9 grandchildren and several nieces and nephews.  He is also survived by his long time companion Isabelle Hall.

One thought on “William E. Derickson”